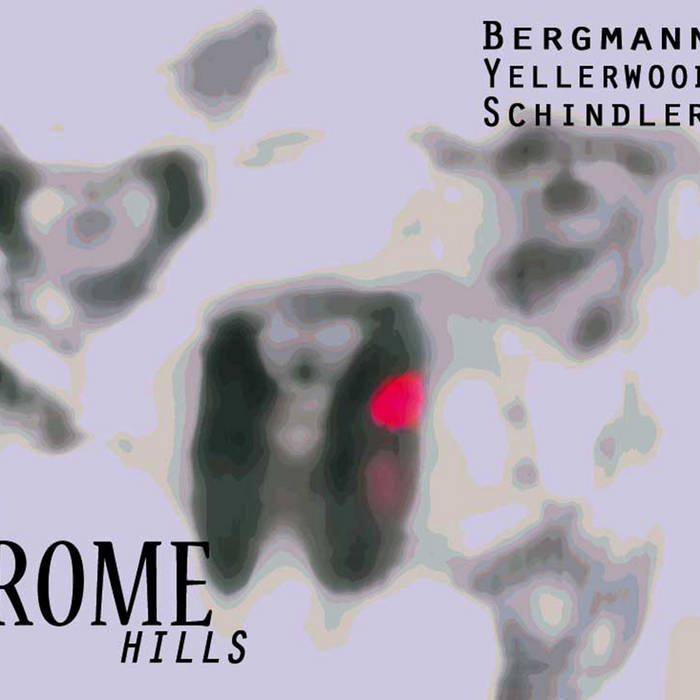 This project originates from a pleasurable Roman afternoon spent by yours truly with Hubert Bergmann, who – having known that this writer’s spouse is, in essence, an atypical songwriting specimen – thought that some experimentation using her vocalism would have constituted an intriguing attempt to do something singular. Files of Bergmann’s duets with Udo Schindler were emailed, and in a matter of several months Yellerwood recorded and “assembled” a number of parts, adapting them to three of the thirteen chapters. The result is Rome Hills, a set of on-the-edge yet totally comprehensible acoustic pictures that manage to sound deluxe and/or crazy depending on the moment.

The technical endowments involved are conspicuous, making for gratifying listening even by just considering the merely aesthetic values. But there are unquestionable depths to be probed all over the program. Bergmann and Schindler enrich their dialogue with fluent savoir-faire in “Blinksquint”, a track that sounds bluesier than the actual blues present in the disc (“Final Palestine Blues”, which sees the cornet as a somewhat drunken protagonist). “Dim Minuendoyalp” juxtaposes warrior-like discordant propulsion with aleatory trajectories replete with primeval cries and cultivated sentences. “Piazzazappa” doesn’t recall anything near the namesake Frank as far as I can hear, showing that high speed and clever finickiness can coexist; a coherent obstinacy imbued with a modicum of semi-sociability. “Candle Fright” is out-and-out glorious, Bergmann’s reserved chords creating the grounds for Schindler’s clarinet to wail quietly, surgical precision defining this great execution. The pianist also dedicates a series of Cecil Taylor-esque flurries to Alfred 23 Harth in “Hearth To Play”.

Yellerwood – who idolizes Meredith Monk, feels a spiritual kinship with Amanda Parsons (of Northettes renown) and goes to sleep with Laura Nyro in the iPod – lends gleaming sinewy pitches to a Bergmann poem in “There Is No Panic Room Where Light And Shadows Could”, jumping ranges with flexible authoritativeness to situate the piece inside early 20th century territories. “Smellägood” – a restfully eerie, quasi-lowercase episode – finds her testing the comrades’ silent wisdom via sharp lilliputian vocalizations mutating into elliptical clusters. In the album’s finale “Cathy’s Bardobath Aria” (note: the girl had never heard Mrs. Berberian’s work before, believe it or not) an underworld of sarcastic elves pushes a growingly complicated entanglement of screechy reeds, immoderate pianism and extremist tittle-tattle to ultimate choral pandemonium, an impertinent tuneful signature utilized as wrap-up amidst the stunned “oohs” of those curious creatures. There seems to be no genre restriction to respect when open-minded artists decide to produce stimuli for everybody’s ears, and they really mean it.

The story behind this music is for the most part unknown. Rome 2012. During a brief stay in February - wandering from place to place in the city, pleasantly warm, every day life in the North now vanishing, somehow a newcomer in this interim spawning ground of being, here where Passolini hinted his portent in the ether. The cafes in which the ether coagulates, barely concealing their peace and tranquility, and each place where memories are celebrated are so old that forgetting now is hardly noticeable. History disappears just around the corner.

One who fights "against" this forgetfulness , is an atypical Roman, Massimo, whom I met in front of the now entirely contrived Fiaschetteria, once the hangout and meeting place of Roman artists, who gave me an update of the happenings in the Italian scene. Later in the train while the sounds of AH23 fluttered gently through my mind (I imagined his burning finger and M.’s portrait sunk into the Tiber), a video popped up, totally unexpected, on my google site. John Cage and Cathy Berberian, who performed this mysterious aria in Rome, sang a piece whose link I was able to pull up on my computer - something about "yellow" and "wood" that I later discovered was "Yellerwood." A voice from the Roman Hills sounded so like Berberian. Then the request on this unknown woman, via Mr. Ricci, if she might be interested in contributing her wonderful voice to recordings done in October 2011 with Udo, a bustling multi-reed man. Something however was missing.

Her voice shuttled back and forth, a poem added for garnishment, out of which a new and peculiar world blossomed into a fine mood. Something from Berberian, the utter essence of nature and beauty. Everything that knows itself is sound… No reason to crash...
HB
translation Jeffrey van Davis

EN
BERGMANN - YELLERWOOD - SCHINDLER Rome Hills (Mudoks, mr 1181-015): How to describe the duets of Hubert Bergmann and Udo Schíndler? As amazing diminuendos and crescendos in yellow? As capriccios run through by gnomes so swift that you miss them if you blink? But in 'Escursionisti Trottoiritum'they whizz and pitter-patter around right in front of your nose. Schindler there has already switched from squaking saxophone to a constrained cornet, that he also blows, as if nearly strangled, in 'Final Palestine Blues', that, even more gloomy as the eery and shrill 'Candle Fright', transfers you into Piranesian carceri. In 'Hearth To Play (Ded. to A23H)' Bergmann alone virtuously pulls all the stops of a striking piano treatise, that he has dedicated to Seoul brother Alfred Harth, unrolling with convulsive-constructivist paradoxes, that old Mannerist Ariadne’s threads guide through the mazes and hallways of Postmodernity. Already behind the punning surface of 'Creak-Knom', 'Dim Minuendoyelp', 'Grotta Grotesko Odo', and 'Piazzazappa'that thinking-out-of- the-box and combining of light and shadow is will-o'-the-wisping about, that Gustav Réne Hocke has praised as ‘Concettismo’. Which takes us nearly to Rome, or nearly to Joyce, but definitely to Yellerwood. Massimo Ricci’s companion bestows three of the pieces with an especially capricious spice. By presenting Bergmann’s poem 'Wo Licht und Schatten sich balgen' as sprechgesang à la „Pierrot Lunaire“. And by kekkering, cooing, and caroling 'Smellägood' and 'Cathy's Bardobath Aria', as if she had John Cage’s 'Aria (Fontana Mix)' or even Cathy Barberian’s 'Stripsody' in her ear, as a looney-tuney kick. Bergmann accompanies that by rumbling in the piano’s stomach, Schindler is puffing and vocalizing around the mouthpiece… Oomoo Poost ya the burning bush a=20=20 comedy, the cowed ..... gru glan knytjÃ¦ blikm kÃ¸ya blikmadnkhl luxg ukadnkita knytjobjik blÃ¸ dnl ..... by Rigobert Dittmann