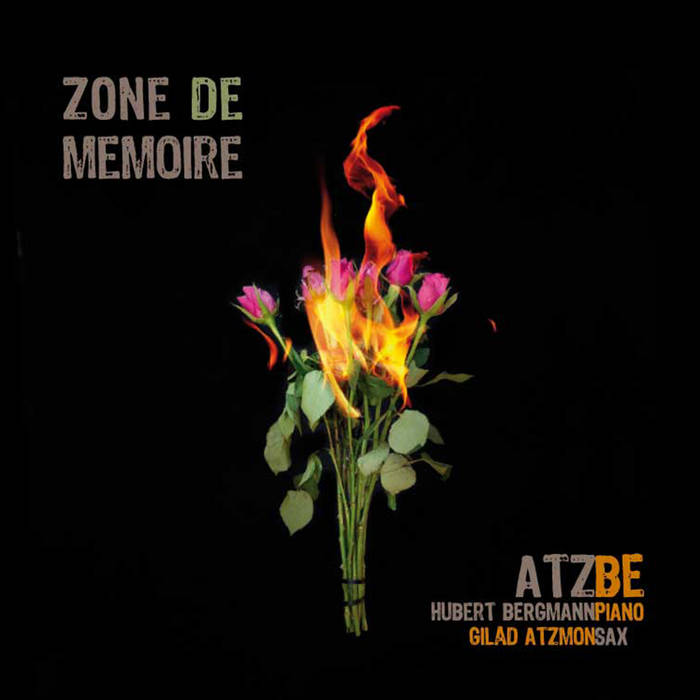 Musical fruitfulness doesn’t come easy. But in an improvisation between two men who are playing together for the first time, something incredible can happen: the instantaneous poignancy of the just-generated material, the visible sparks of the respective imaginations, the concrete explanation behind that fundamental instinct which pushes gifted humans to attempt a creative act to look into themselves to begin with, and communicate with fellow talented specimens later on.

Zone De Memoire is the result of one of those born-in-heaven encounters. Reedist Gilad Atzmon and pianist Hubert Bergmann recorded these magnificent seven tracks in an afternoon, prior to a concert of the British artist with Sarah Gillespie at Überlingen, on Lake Constance. Already in the opening exchanges of the initial “Roof Of Clouds” it is quite evident that there was no mâitre around to make sure that the champagne was being served. Straight away, the couple enters the areas where there is nothing else besides those intelligible figurations, significance distilled from an alternance of passionate inflexions and softened accents, occasionally leaving room to precious instants where riveting intuitions and an impressive sense of anticipation prevail on a potentially damaging paroxysm, turning impromptu gestures into a contrapuntal logic of the highest order.

Piano, alto and soprano saxophones, clarinet. Well known colours, both in jazz and free music at large, appearing all the more familiar when there’s no need of radical disruptions to hit the right spots in a listener. Bergmann’s touch and physical mastery on the keyboard are decisively solid despite a lingering romantic aura; Atzmon seems to exhale melancholy even when the fire in his tone burns hot, sheltering hopes and fears under hundreds of melodic insights. You are not going to experience the kind of inner laceration caused by the harshest types of sonic message; and yet, ATZBE belong to that category of unstained virtuosos that manage to appear noble and unpretentious at once. The ones who suggest us to leave whatever we’re doing, and get the instrument in our hands again for the few inestimable minutes of wordless contentment that life still reserves beyond bogus cosmic connections and ever-torn nets.

ATZBE is the working title for a duo of master improvisers: German pianist, Hubert Bergmann, and UK-based reeds player, Gilad Atzmon. Zone De Memoire is the duo's first album, a set of seven improvisations recorded in a single afternoon, and Bergmann and Atzmon's first musical collaboration.

Bergmann seems to relish the thrill of this first improvisational meeting. A similar collaboration with clarinetist, Lajos Dudas, produced the highly enjoyable What's Up Neighbor? (JazzSick Records, 2011). Atzmon leads the highly-regarded Orient House Ensemble, is a longstanding member of one of the UK's best-loved rock bands, The Blockheads, and works with vocalist, Sarah Gillespie. This album was, in fact, recorded in Uberlingen, Germany, on the afternoon prior to a concert by Gillespie.

The freshness of the music certainly suggests that this is a new partnership, but there is none of the tentative exploration that might also be expected when two musicians interact for the first time. Bergmann and Atzmon display a confident assertiveness from the beginning—respectful of each other, interacting cooperatively rather than in competition, and each creating new pathways for the other to follow.

The music is characterized by the superb agility of both players. They constantly dart and swoop around each other on the 15-minute "Invisible Abyss," and Bergmann's percussive, staccato piano is counterpoint to Atzmon's equally urgent, but smoother patterns.

On the slower tunes, such as the warm and romantic "Roof Of Clouds" they construct atmosphere as though they had played together for years. Atzmon opens "Beyond Boundaries" with a melodic, soft-toned alto sax solo. Handing it over, Bergmann builds a more jagged, up-tempo, pattern, upon which Atzmon then picks up to build a solo with a fiery, sparkling, intensity. There's fun, too, especially from Atzmon. He relieves the darkening mood of "No Thing" by breaking into "Smoke Gets In Your Eyes," and makes his instrument laugh like a scary circus clown, as if in response to this sudden joke.

Duo improvisation is a fertile, creative territory. On Zone De Memoire, Bergmann and Atzmon successfully explore this territory with invention and humor—it's a first date and hopefully, there's more to come.